Working to get by: Scenes from the streets of Nairobi 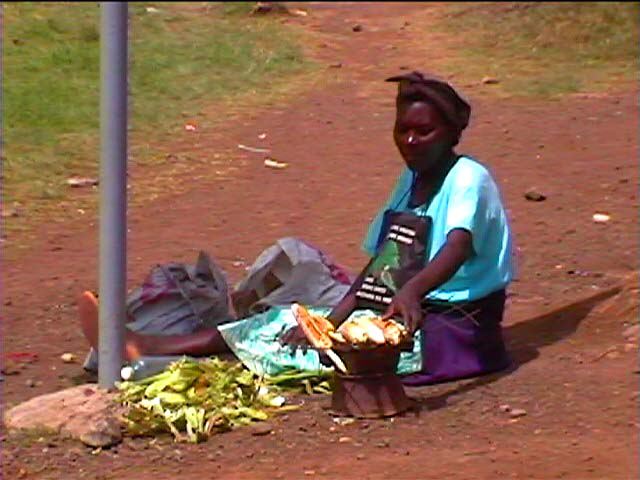 Typical of the economy and situation here, this woman sits all day every day on this same corner, roasting corn on a little charcoal grill to sell for a few shillings to buy other food for her family. The sun is hot, the road is dusty, the people she sells to are few and far between, but at least it is something. Unemployment and poverty are the norm in this part of town, so people do whatever they can to get by as best they can. The corn is not sweet corn, it is maize, feed corn. It is very filling and tastes good when cooked on a grill. 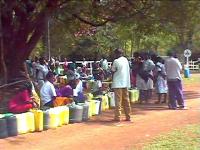 Getting water in the squatters part of town is always a problem. As is typical of developing nations, people have come from all over and settled around the big cities in hope of finding work. There is no civic planning nor city services like water and electricity. People come and put up shacks, with the spaces in between becoming roads by definition. Eventually people will string wires for electricity over the buildings, but putting pipes underground for water and sewage is a much larger issue. 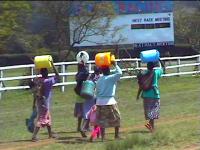 So people walk every morning to where the water is. Here by the racetrack all day every day there is a line a people 50 yards long waiting to fill their water jugs from one water tap. The line begins at about 4:30 in the morning and people will wait for hours. The ladies on the right are carrying their water home in the traditional African way, on their heads. 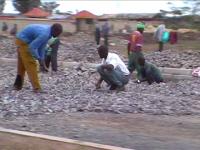 Unemployment, a lack of infrastructure, ... where to begin to address the problem? On place is on the Ngong Road. The roads in general are poorly maintained, so some men take it on themselves to patch potholes as best they can. However, with UN backing, the government is also rebuilding a major East-West thoroughfare on the South side of Nairobi, the Ngong Road. 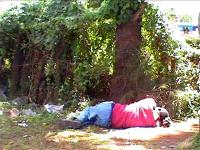 Most of the work is done by hand. Men with pickaxes and sledgehammers break up rocks and then stand them on edge in perfect formations to make a solid roadbed. Other men dig the trenches alongside the road with picks and shovels. Only after they have laid three layers of roadbed by hand does a steamroller come along to pack it down. It is hard work, but it is work for many hands. Of course, it can not employ everyone, so scenes like the one at right are also common, men taking naps in the sun by the roadside in the middle of the day.