A Visit to Champ du Feu

Alsace is defined by the Vosages, the mountain range on the western side of the province. Champ du Feu is on the ridge, hovering over Alsace. The image at the top is taken from the 100 year old tower there. On a clear day one can see the Alps, the Black Forest, and the Alsacian plain through which flows the Rhine. Of course, we didn't have a clear day, but the rain added an air of mystery to the setting.

Claudio Monge (left), a brother from Italy who is studying Turkish in order to join our mission in Istanbul, took the morning off school (woops, don't tell his provincial) and the two of us hiked a bit through the region. The snow was still clinging to the hilltops in the Hohwald region, having snowed three days before.

The woods were silent, as hemlock forests are. 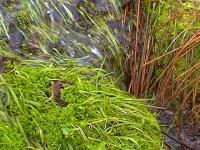 The streams were flowing though, and the water was crystal clear. We had lunch next to a spring, baguettes, cheese, apples and mountain spring water better than wine. 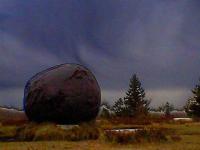 At the end of the hike we found a strange field of "modern art." On the ground were squares of white marble, as if markers of graves. Amidst the stones were three iron sculptures, the ball you see to the left, an obelisk, and a tablet reminiscent of the sculpture in 2001: A Space Odyssey. The field was interspersed with heather and short alpine tundra grass. Im not sure I "got it", but the sculptor was from Paris so I am sure it was very meaningful. 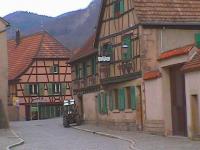 On the way down we stopped in Andlau, pictured at the left. Very Germanic and old and lovely. Typical of the region.