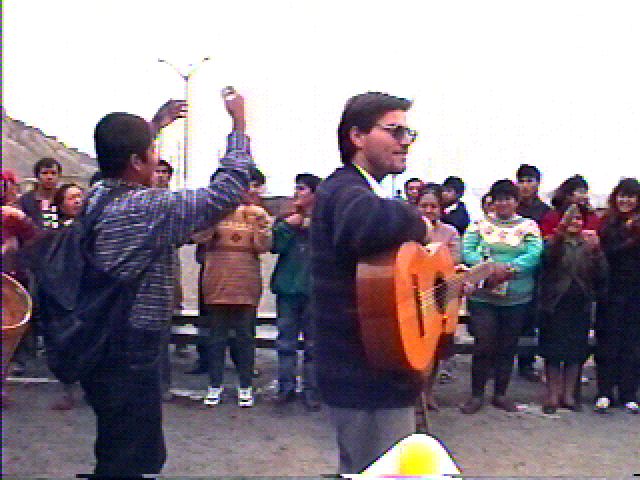 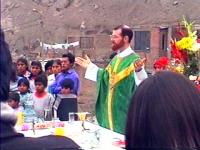 Fr. Tom Kraft, the Master of Students here, presides at mass every Sunday out here in Campoy, since there is no local pastor. Officially it is a mission of another church in the area, though the other pastor couldn't cover so many "chapels". The parish is mostly run by lay people with the help of some local sisters. 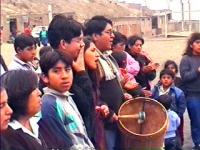 On this day, we had two masses. The first was outside on the hillside, where a new piece of land was leveled to make a new chapel for a new part of Campoy, Alta Paloma. Alta Paloma did not exist 10 years ago. It was a barren mountainside owned by no one. People just came here in what is called "an invasion", and started building homes, first out of reed mats, then adobe bricks, then with real bricks as they are able, "poco a poco". At this site, we are dedicating the first stone.

The music group is fairly charismatic and from a nearby parish. They played for about 45 minutes before mass, since we weren't ready to start. Nothing starts on time here, of course, and people expect that sort of thing. 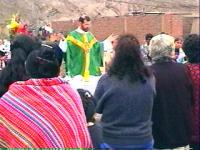 You can see the barrio behind us. There are still houses at each level of construction, still people living in reed huts and a few with real bricks and fiberglass roofs. People have also just started building up the hillside. Perhaps some day they will go clear to the top of the mountain. You can recognize an area as having become solidly middle class when many people start adding second floors.

People come as they are, and people here are from all over Peru. Notice that some are wearing American clothing, while others wear more indigenous clothing. We are all transplants here. 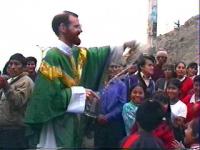 After mass, we blessed the people, the ground, the rock and just about everything else. The rock was then christened with the traditional bottle of champagne.... holy champagne of course. The woman who broke the bottle is one of the main organizers for this project. She is coordinating the work of the volunteers.

The rock is from the hillside. They burn tires on the rock for a few hours, heating them up, and then hit them with sledgehammers. This breaks the rock into pieces that can be used to build the foundation (and it clears the site).

Alta Paloma is growing fast with construction everywhere. As people move in to their reed huts and start scrounging bricks, they build themselves a church at the same time. This church will take years to build, as will the houses, but it all grows up together. 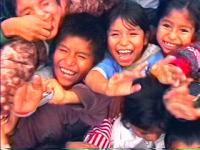 In the end, a splendid time was had by all, especially when the kids got to see the playback of the video pictures. 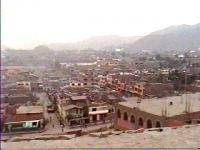 Here is a picture of greater Campoy. You are seeing about one eigth of the town from the front door of the older chapel. This church was built on the hillside just like the one that has just begun. The Dominicans have been helping here since the beginning of this chapel some twenty years ago.
Notice that many of the houses in this section of Campoy have second floors. Progress! 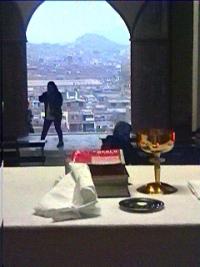 And the view from inside the chapel is great as well. The door frames the city.