Strasbourg is a lovely town in an incredible region of France. The heart of town is crisscrossed by a number of canals, all derived from the Rheim River, the present border between France and Germany. Of course, this border has moved many times in the past, so the people of the region speak Alsacian, which is a dialect of German not French. 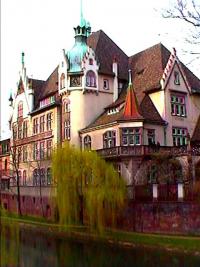 Most of the architecture is German as well, as in this photo, but ask people and they will tell you that they are FRENCH. This is the adminitrative center of the European Parlament and the European Union, being itself a bridge between two large European cultures. I will tell more about that later.

The center of town is domininated by the Cathedral, Notre Dame. You can see it in the lower left photo towering over the other buildings, even though it was built in the twelvth century. This photo is a detail of the front of the cathedral. Go ahead, click on it! The façade is encrusted with a multitude of saints, angels and archangels in patterns I have yet to figure out. There are a hundred of them just around the door! 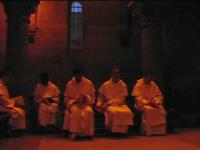 Strasbourg is also the home of the novitiate of the friars in the Province of France. It is (of course) a wonderful community. The chapel is dark and gothic, adorned mostly with arches and shadows.

The brothers are bright and sunny. After meals everyone pitches in to do the dishes, making a beehive of activity in the kitchen not for the claustrophobic, but perfect for those love Community. The food is Alsacian, so it is VERY important to keep up my running. I don't think they know how to make bad food, or perhaps never would even on a dare. 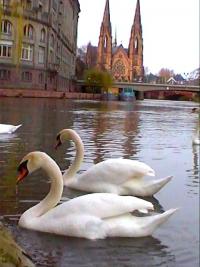