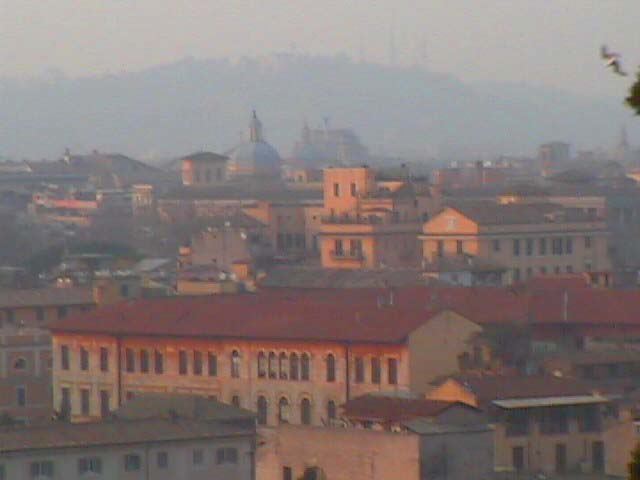 Rome, the Eternal City. Indeed it is, eternal and enduringly beautiful. It is incredibly old, yet still alive and vibrant. It is a city that has learned to treasure its past without being trapped by it. 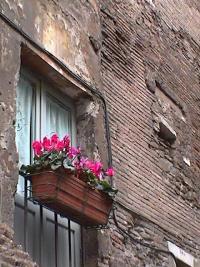 As an outsider, I saw much of that past critically, and expected Rome to still be "imperial", but it wasn't. It was fresh and charming, light and airy. Like these flowers adorning an ancient wall, new life emanating from ancient palaces. 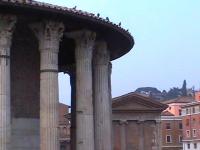 Many of the buildings are painted the color of the glow just before the sunrise or just after sunset so that at those times, the city itself glows with an irresistible warmth. The top left picture is the view from the balcony on any given day at Santa Sabina, our headquarters. It hovers above the Tiber on the Aventine Hill overlooking much of Rome, just down river from the Forum, the Circus Maximus, and this temple to a goddess.

When I first arrived, it was still winter, warmer than Chicago, for sure, but the land still holding its breath and people still braced against the weather. But something happened in two short weeks, some subtle shift in the weather or in the people or perhaps both. These daffodils opened up in the sisters' garden beside Sta. Sabina. The piazzas where people hurried by the week before were suddenly filled with people and tables. Spring had come, time for the Carnival and outdoor cafés. 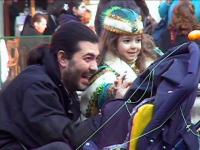 Here is a family playing in a piazza. All of the children were dressed up in elaborate costumes for the Carnival and walked around showing them off. Then came cans of silly string and a gleeful war. 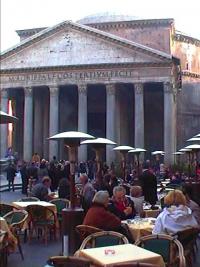 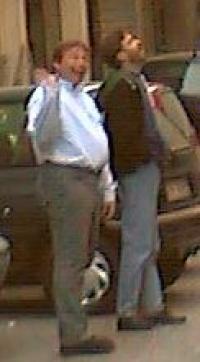 Of course, there are still the odd tourists. Here are Martin and André, Dominicans from South Africa and Canada who are studying in Rome and showed me around the city. And what do they get for their kindness? The worst photo I could find of them put on the internet with disparaging remarks!