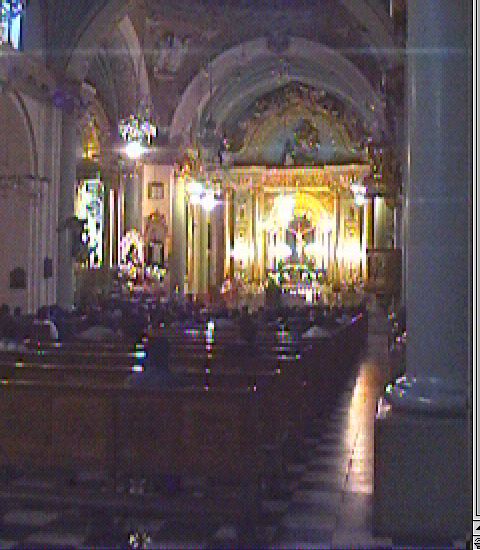 I took a few pictures of the church for you. This first one is of the interior of the main part of the church. It is a little difficult to see because of the lighting in the church. They seem to prefer the "bare bulb" approach, and of course only the sanctuary really needs to be lit (and various side altars). It is a very large church with masses every hour all morning. The first mass of the morning is even broadcast on the radio. Fr. Linus is preaching and if you look at the blow-up real close, you can see him standing in front of the altar in a characteristic "American" way. The Peruvians tend to preach from the altar or the pulpit.

On the left side of the main church is the resting place of the remains of St. Rose of Lima, Martin de Porres and Juan Masias. This is of a statue of St. Rose, asleep or perhaps swooning in prayer or in death with an angel attending her. It is very well done. 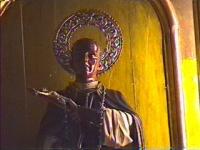 This is of the head of the statue of St. Martin de Porres. He was a cooperative brother, not a priest, and he took care of the poor in Lima. He had miracualous powers of healing and was known for giving away the brother's food to the poor and taking care of them. He cleaned the convent here, and one day he was asked to get rid of all of the rats. He loved all creatures, so he spoke with the rats and told them how they were upsetting the brothers, and asked them if they could please stay outside. They agreed and the brothers never had a rat problem again. This is why Martin is usually pictured with a broom and a rat at his feet. 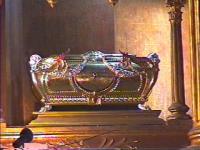 The next picture on the left is of the ossuary of St. Martin. It is kind of small because he is so widely known that many of his bones have been given away as relics. Ah, the problems of sainthood. 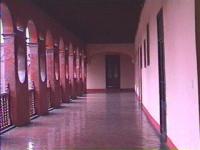 The final picture is of the door to my room. The hallways here are grand, but I'll save the picture of the room for another day. Anticipation!