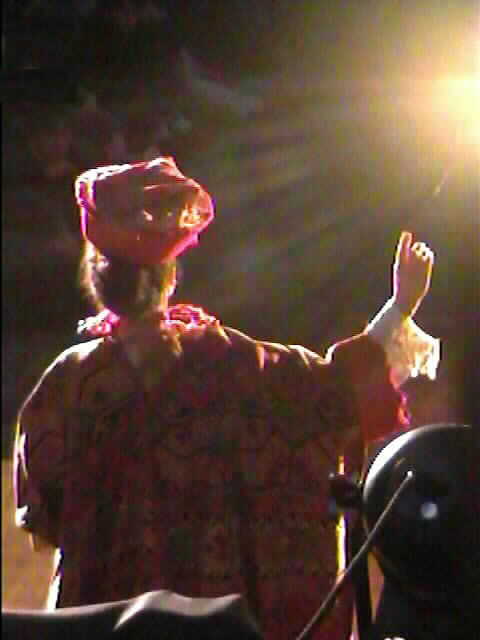 The evening of the Jubilatio was filled with Le Spectacle: Le Livre des Justes (the Book of the Just), a play in the style of a medieval mystery, meant to be performed in a Cathedral to educate the faithful. Making use of scenes from the Book of Revelation and the Book of the Prophet Daniel, the play presents the universal struggle between good and evil. 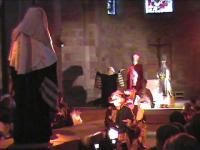 As in a Greek tragedy, the only actor who speaks is the narrator, passing through scenes speaking with the characters, prophesying from a book in her hand. When her "real character" actually interacted with the other charaters, she split into two people, watching herself as in a dream and commenting on the scene. On the left we can see both her personalities. She as narrator is prophesying, reading from her book, and she as real prophet in the scene stands with her hands upraised. 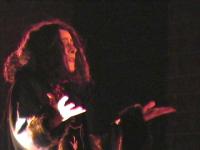 The other actors spoke only with voices coming from off-stage, using dramtic poses and symbolic gestures to elabortate the meanings and emotions. On the left is the Queen, 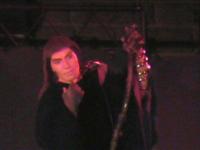 who sold her soul to the devil to become Goddess of the New Religion. 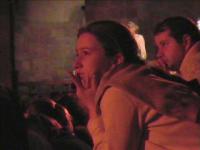 The action passed in the midst of the crowd, making them a part of the production. This, the elaborate costuming, and a musical score that went from Gregorian chant through Baroque and on into ultra-modern "noise management" drew the crowd in well. 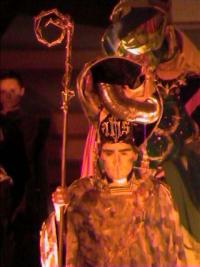 A priest also sold his soul to become bishop. In the end, however, he begins to realise his mistake. God has written a prophesy on a scroll, and the bishop is determined to save it. A yound boy, Daniel, found on the steps of the cathedral, is the only one who can interpret it. When he does, the Bishop and the Queen finally realise the error of their ways but too late. The demons kill Daniel, but are themselves then swallowed up by the prophesy unleased. 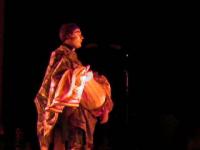 The Queen and the Bishop fall in ruin, and the bishop carries the dead boy to the arms of the just, weeping, vanquished.