A Last Glimpse of India

As I leave India, I realize that I have so many incredible experiences in such a short time, that it would be impossible to share them or even to understand them. But I have just a few more photos that I would like to share, mostly because I had none of the really "normal" stuff here-cows! Cows wander all over town and are completely free to do what they want. On the streets they often cause traffic jams.

These two first pictures are by the river, where cows are just part of the colorful entourage that ply the banks at every moment. In the first picture, the cow is interested in the flowers that the women are using in their puja (prayers). The women are interested in keeping the cows from eating their prayers, but they cannot hit them or even really chase them away. 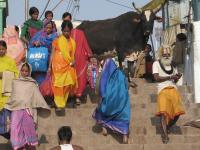 In the second picture, a bull stands at the top of the stairs, deciding if there is anything interesting on further down. The pilgrims, women in colorful saris and sadus with painted foreheads, must squeeze past the bull in order to get down to the river. Again, no one tries to move the bull on. He is left to do as he wishes. 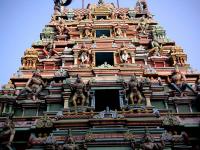 I like this third photo of a temple near the ghats because it so perfectly mirrors the world around it-a dizzying array of colorful figures, each looking its own way, but somehow, together, making a coherent and powerful whole. I think this temple is for Parvati, the wife of Shiva. 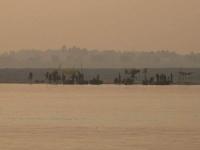 In the last photo, some pilgrims gather on the other side of the river in the dawn. There are no buildings on the other side. It is a muddy flood plain. It is quieter and slower. I thought of taking a boat ride over there, but there was always more to see in Varanasi itself. I guess I'll have to come back, because today I leave for Nepal.