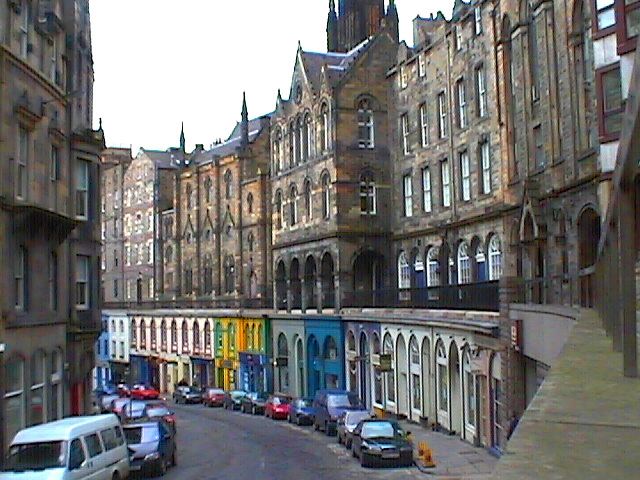 Just a few thoughts from Edinburgh, because it asks more questions than it answers. The city is absolutely beautiful, at least the inner city. On the top left is a typical street winding down the hill from the back side of the castle, old stone townhouses with businesses on the first floor, grey and solid, but still beautiful and graceful somehow.

Here is the back of the row of townhouses in George Square where the Dominicans live. One of their houses is the childhood home of Sir Walter Scott. It probably saved his life. His older siblings had all died of disease living in the Old Town where plagues and filth were the order of the day. Then someone got the bright idea, "Since the wars appear to be over, why not build outside of town where the air is clear?" He built George Square (named after his brother) and sold sections to local families. Sir Walter Scott's family moved up here, and though Walter had been sickly, he got better and eventually went on to greatness. 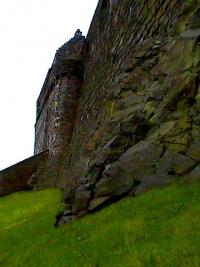 More ambiguous, though, is the castle. It is absolutely spectacular, hovering over town on a huge volcanic rock, built and rebuilt since ancient times. Its oldest surviving structure is a 13th century chapel built to celebrate the memory of St. Margaret who died here. But it has always been a hotly contested piece of strategic high ground, and its history is incredibly bloody. Scots building it, losing it to the English who slaughter everyone and take it over, who are then eventually slaughtered by the Scots when they retake it and on and on. It now houses museums, the crown jewels of Scotland, and a Scottish garrison. The story is tragic, heroic, quintessentially Scottish yet typically human. Why do we go so easily to war? Why why why ... 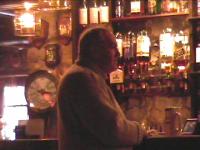 On another note, Tom Kearns rented a car and showed Tim Gardner (the holy novice) and me the highlands. Spectacular! The lower highlands remind me very much of the Aleghenny Mountains in Pennsylvania, but the upper highlands are as stark, brooding and profound as the Alaskan tundra.
Here is Tom in The George Hotel, a pub where we stopped for lunch, in Iverary a little town built from scratch just in the 19th century when the local landowner the Duke of Argyll. The Duke got tired of his castle being in the middle of a city. Rather than moving, he built a new town and moved the city away from his castle. That's one way of doing it, I suppose. 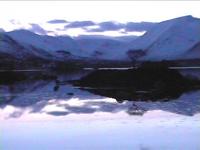 Here is a lake, Loch Tulla, near the Bridge of Orchy, in the twilight after the sunset. We came here after a beautiful drive through Glen Coe (site of an infamous massacre) and Rannoch Moor.

If you look closely, you can see that the reflections in the water are sharper than the trees and clouds themselves. It often seems that way in Scotland, memories clearer than reality, yesterday more powerfully present than today. The present is impossible to understand, it keeps moving out of focus into ambiguity. I suppose the past was the same were I to have been there, confusing and ambiguous, at once heroic and tragic, proud and sickening. Ah, but reflect the past in a story and one can make sense of it. A story can have a point, a lesson, that is much easier to get to than reality.