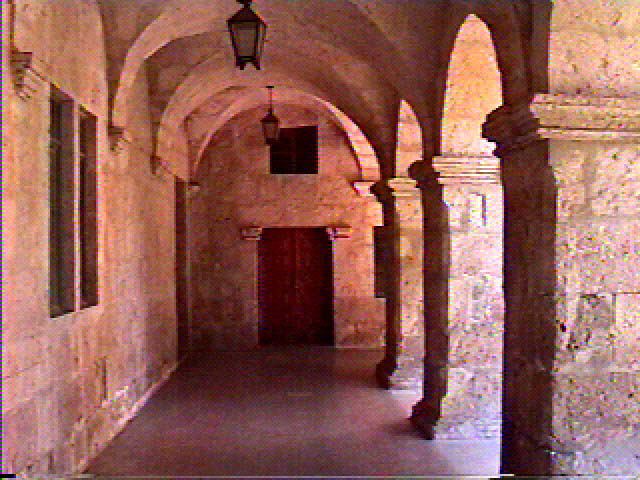 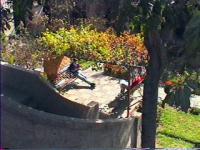 The priory is generally called Santo Domingo (after the church and generally referring to the Dominicans). It was made in 1563 out of native volcanic rock which gives it a very solid and beautiful look. Top left is a view of the walkway under the porticos. The light filtering in changes all day. All of the churches here are made of the same stone, hand carved hundreds of years ago. The priory has three courtyards, and at the middle left is the one most used. It has graceful curving steps that lead upstairs, and a sitting area under a grape arbor that is the center of community life. 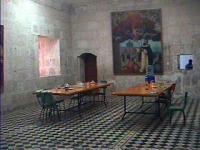 Here is the dining room hewn out of the same stone, very ancient, yet recently renovated. 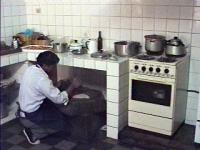 On the left is a picture of the kitchen, an interesting blend of old and new. It has a modern (but old) stove and a large rock for grinding flour the traditional way. Benito, the cook, took a moment to demonstrate for us, since he had already ground what he needed for the day. 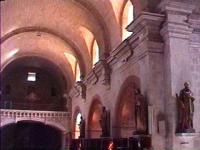 Here are a few views of the church. It is receiving a new floor at the moment. The top picture shows the vaulted ceiling, sort of Romanesque. Again, the way the light plays off of the rock makes it seem as if the walls themselves glow. 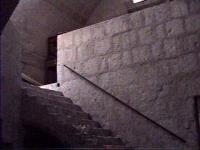 Here is a stairway connecting the church and the priory. There is an intricate series of rooms in between these buildings. It gives on the feeling of hidden passageways and secrets from hundreds of years past. In fact, it has many secrets to tell, because it was the novitiate in the old days and we all know how that goes.... 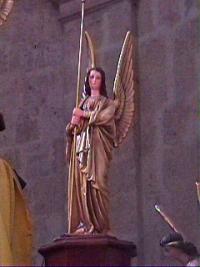 Fortunately the angels are always standing guard. This one watches from beside the tabernacle. 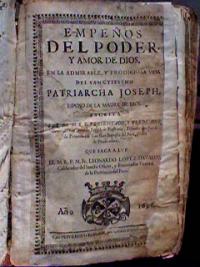 The priory also has a very old library. The top photo shows a book which was printed in 1696 on the life of St. Joseph, husband of Mary. It bears an inscription that is was obtained for the library here in the 19th century. 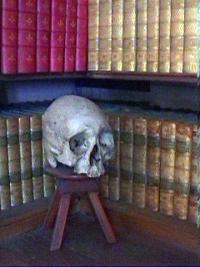 In the corner of the library is a real skull, or at least it looks real. In medieval art, the skull represents wisdom as wisdom is achieved in pondering one's death and the shortness of life. I assume that is what this fellow is doing here, but how do you tactfully ask that in Spanish? 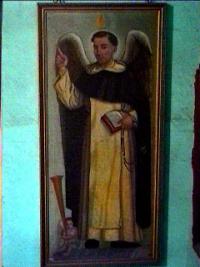 As I look back on this page, I see there are very few pictures of real people. Click here for some photos of the brothers, and just wait, more photos are on the way and these will have real live people in them.