Along the Road, Somewhere near Tibet 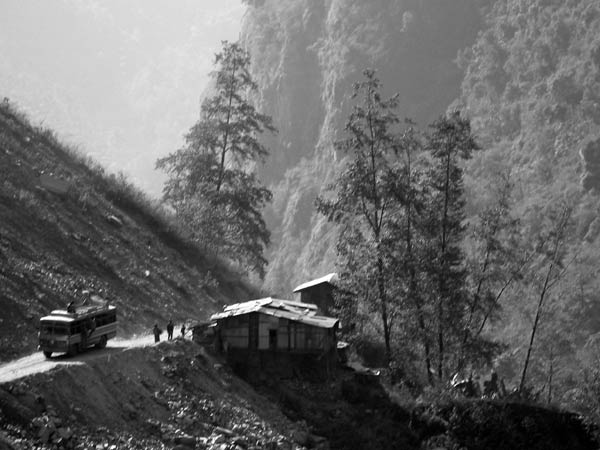 A scene along the roadside near Tibet. As we get nearer to Tibet, the road gets progressively worse. At one time, it had probably all been paved, but here it follows a narrow canyon so steep that the walls are constantly sliding, taking the road with it.

Although this is a highway, it is also literally people's front yard. As we passed this house in a cloud of dust, a man was chopping wood and a woman was doing her sewing in the roadway. They leave one lane open, and vehicles simply use the one open lane, just as you would in any of the many narrowings of the road. Imagine how dusty it would be to live here, though.

Later that night we stopped at a hotel by the road. After dark, I took a walk though the little village to smoke my pipe and to see what was happening. Fifteen houses, no more. Only two doors were open to the cold night air. As I walked past one, I greeted the folks inside. Namaste. They greeted me in return and invited me inside, next to their hearth where they were cooking supper. They had a million questions, and so did I. We talked and laughed like girls at a slumber party. I asked the little girl her doll's name. Not "Barbie," "Sushma," like her older sister.

I finally had to tear myself away when the man from the hotel came by, wanting to lock up for the night. As I left I remembered walking around a little neighborhood in America. Elmyra, New York. I was staying as a convent of Dominican nuns. Someone called the police, wondering who this stranger was, talking to their children. The officer was very polite, as he checked out my driver's license, and I assured him that I was not insulted. It's a shame, but people have to watch out for their children these days.